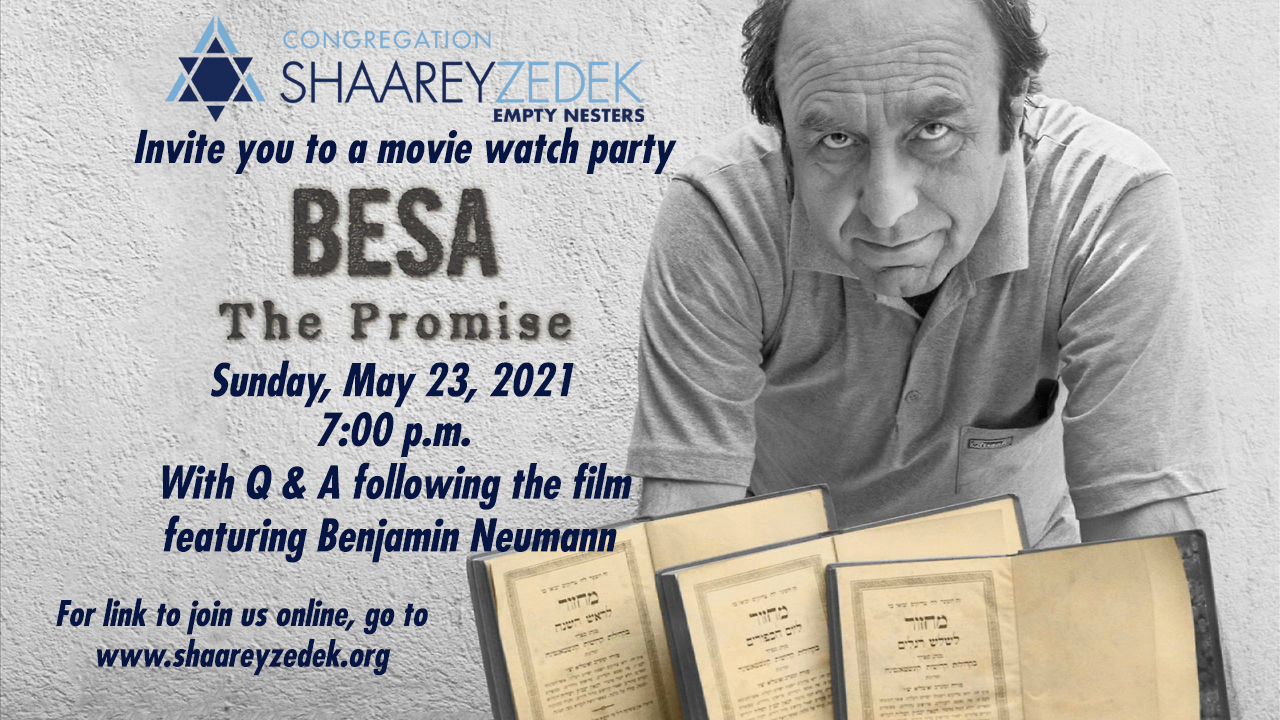 CSZ Empty Nesters invite the entire congregation to join them on Zoom to watch Besa: The Promise.

A persecuted family on the run… Sacred books hidden for their protection… A 60 year old promise – unfulfilled but not forgotten… BESA: The Promise weaves Albania’s heroism in WWII through the modern day journeys of two men. One is Norman Gershman, a renowned American photographer determined to document first-person accounts of the Albanians who rescued Jews during the Holocaust. The other is Rexhep Hoxha, an Albanian shopkeeper. Rexhep must fulfill the promise made to a Jewish family his Muslim father rescued during the Holocaust and return to them a set of Hebrew books they left behind. And Rexhep’s promise is more than words — it’s part of his besa — an honor code that, among other things, pledges all Albanians to offer safe harbor to refugees.

Following the film, stay on for a Q&A with Benjamin Neumann, whose mother (along with her parents) was saved by an Albanian family during the Shoah. Benjamin “Benjy” Neumann ​​​​​​​was born in Boston to David and Johanna (Gerechter) Neumann. Both of his parents were born in Germany but left before The War broke out.  His father left Germany for Palestine in 1936. However, his mother, Johanna, and her parents did not leave Germany until February 1939, and they survived the war by finding refuge in Albania. They left Albania in 1945, after The War and spent a year in a DP (Displaced Persons) camp in Italy before coming to the U.S.  She made it her mission to show her appreciation to the Albanians and tell the story of these honorable and inspirational people. Albania was the only country in Europe that had more Jews at the end of the war than at the beginning. Not a single Jew was found by or turned over to the Nazis in Albania during the war. Benjy’sparents met in 1947 in New York, moved to Boston, and the family made Aliyah in 1969.

Mr. Neumann works for NASA in Washington, DC, where he holds the position of Director for the Human Spaceflight Capabilities Division. He is responsible for such services as rocket testing, flight crew health and safety, and research to enable human health and performance in future exploration missions. Mr. Neumann and his wife, Ellie Katz, live in Rockville, Maryland.

Click HERE to receive the link to watch the film with us online.